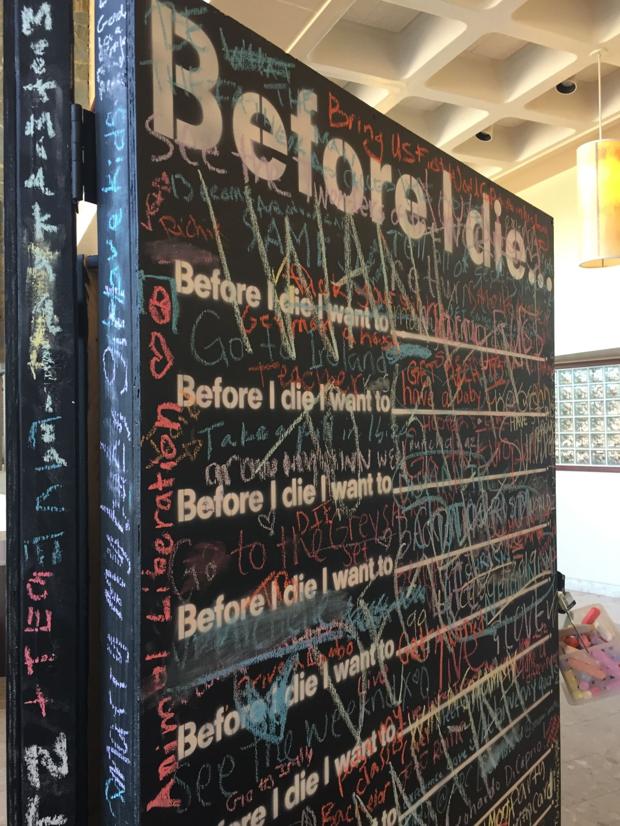 If you could share your thoughts and wishes about the things you want to do in your life before you die, would you?

Before I die I want to… Travel the world? Get married? Learn to Yodel at a Walmart? Whatever the wish may be, it reflects the desires and goals of the individual.

The “Before I die” walls are visiting Stan State’s campus courtesy of The Community Hospice located in Modesto. They have been on campus since Apr. 30 and were scheduled to leave yesterday.

The walls were located in the Vasche Library, Mary Stuart Rogers Building, and Naraghi Hall of Science. Students, faculty and staff are encouraged to share their wishes and to read the wishes of others.

The project began back in New Orleans when the artist, Candy Chang, had experienced the loss of her friend and wrote on the side of a building what she wanted to do before she died. The “Before I die” walls have become a worldwide project and can be found in more than 70 countries.

Kristin Mostowski, Director of Public Relations at Community Hospice, explains the significance of the walls to this community.

“Franklin & Downs Funeral Home actually helped pay for the walls and the Lowe’s in Modesto constructed the mobile walls. So, it was made by the community and shared within the community.” Mostowski said.

People should take advantage of the opportunity to write something since “it is the only time you can legally do graffiti,” Mostowski said.

The walls have been shared as a way to promote positive conversations about dying and end of life decisions in the community.

Mostowski said that through education and positive communication the hard decisions for end-of-life care will become easier to discuss.

“Our organization really focuses on educating the community and helping for those difficult conversations. Also, to be proactive and have the difficult conversations with their family that way when the time comes family members are not left guessing what their wishes would be. Instead, they can focus on celebrating them and carrying out their wishes, rather than being conflicted, wondering what the right decision is,” Mostowski said.

Julianna Casciaro (junior, Psychology) explained what she wrote on the wall and the meaning for her choice.

“I wrote before I die I want to swim with the sharks. It was super cool to see what others wrote and I tried to write something others didn’t write,” Casciaro said.

Casciaro feels that the wall connects people because it allows her to “see what people have on their bucket list.”

“It’s really inspirational to write out all the things we always wish we could do or say. Seeing this wall and being able to really think about what I really want to do before I die puts life in perspective for me,” Nuñez Balladares said.

The walls are great for inspiring communities, but it also serves as a memento mori, a saying from Latin meaning “Remember you will die.”

“Death is taboo to a lot of people, but it is part of our lives, it is inevitable for each of us,” Mostowski added.

These walls engage people to critically think about difficult topics like death.

“I don’t think young people really think about death as much as a person who is older. So our goal is to educate everybody and to encourage people to critically think about what is important to them. Our younger communities are going to be facing these difficult decisions for their parents. If they are able to start asking these questions now with their loved ones then that is a really great thing,” Mostowski said.

The walls have made its way through the community, beginning at the offices at Community Hospice where it then moved to University of the Pacific (UOP) in Stockton for two weeks. After, it was sent to Modesto Junior College (MJC), Earth Day in Modesto, then back to Community Hospice.

It was at Stan State and left Monday, returning to Franklin and Downs Funeral Home where they will be holding a candlelight vigil surrounding the wall.