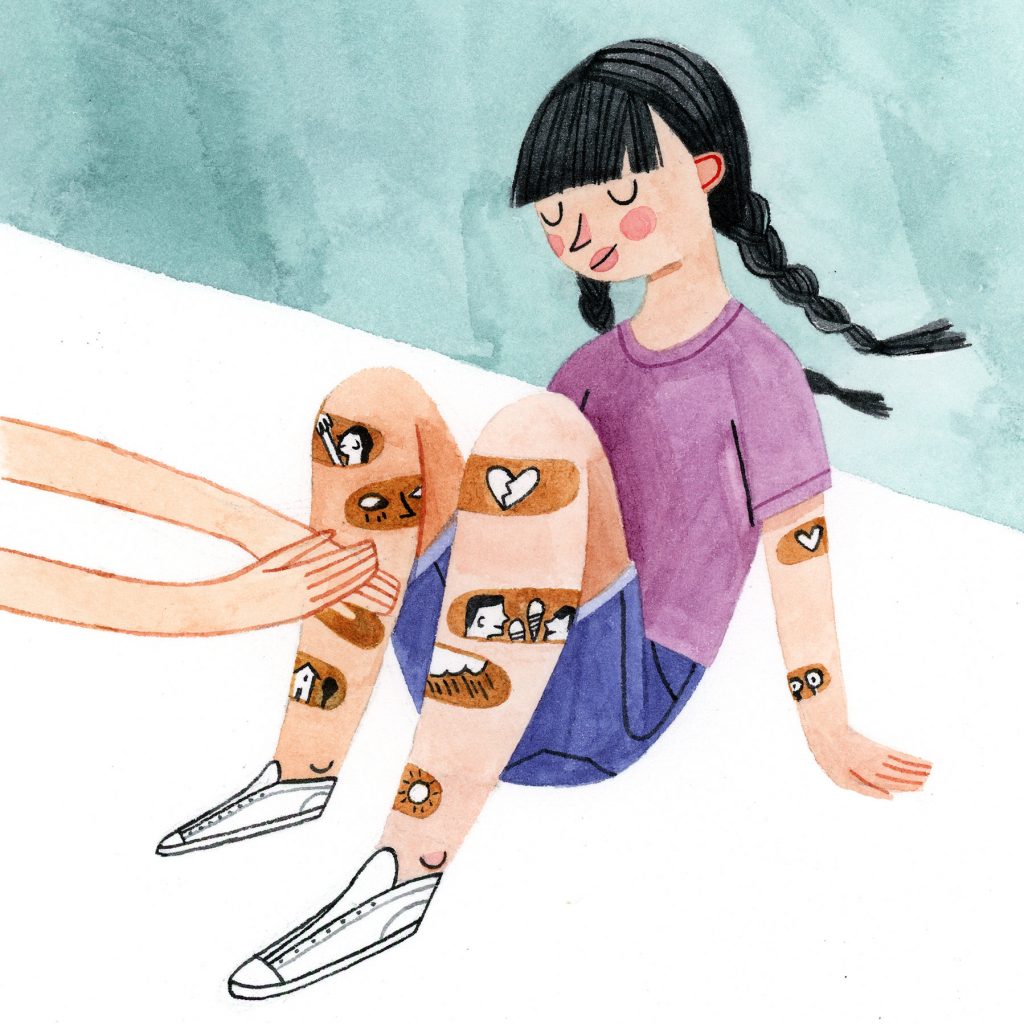 After my husband’s death, I set out to learn everything I could about how kids persevere through adversity.

Two years ago, in an instant, everything changed for my family and me. While my husband, Dave, and I were on vacation, he died suddenly from a cardiac arrhythmia.

Flying home to tell my 7-year-old daughter and 10-year-old son that their father had died was the worst experience of my life. During that unimaginable trip, I turned for advice to a friend who counsels grieving children. She said that the most important thing was to tell my kids over and over how much I loved them and that they were not alone.

In the fog of those early and brutal weeks and months, I tried to use the guidance she had given me. My biggest fear was that my children’s happiness would be destroyed by our devastating loss. I needed to know what, if anything, I could do to get them through this.

I also started talking with my friend Adam Grant, a psychologist and professor who studies how people find motivation and meaning. Together, we set out to learn everything we could about how kids persevere through adversity.

As parents, teachers and caregivers, we all want to raise resilient kids — to develop their strength so they can overcome obstacles big and small. Resilience leads to better health, greater happiness and more success. The good news is that resilience isn’t a fixed personality trait; we’re not born with a set amount of it. Resilience is a muscle we can help kids build.

And every kid faces challenges. Some stumbles are part of growing up. Forgetting lines in a school play. Failing a test. Losing a big game. Seeing a friendship unravel. Other hardships are far more severe. Two out of 10 children in the United States live in poverty. More than 2.5 million kids have a parent in jail, and many endure serious illness, neglect, abuse or homelessness. We know that the trauma from experiences like these can last a lifetime; extreme harm and deprivation can impede a child’s intellectual, social, emotional and academic progress. As a society, we owe all our children safety, support, opportunity and help finding a way forward.

We can start by showing children that they matter. Sociologists define “mattering” as the belief that other people notice you, care about you and rely on you. It’s the answer to a vital question that all children ask about their place in the world starting as toddlers, and continuing into and beyond adolescence: Do I make a difference to others?

When the answer is no, kids feel rejected and alone. They become more prone to self-destructive (“Hurting myself isn’t a big deal, since I don’t count anyway”) and antisocial behaviors (“I might be doing something bad, but at least I’ve got your attention”). Others withdraw.

Not long ago, a friend picked up her son from a summer day camp and found him beaming with pride that he’d finished the robot he’d spent two days building. The next morning, he returned to find his robot had been destroyed: Bullies had taken only his apart — and then told him that he was worthless. After that day, his mother watched him sink into a spiral of anxiety and depression. Even when he went back to school in the fall, she recalled, “he’d put on his hoodie and sit in the back, in his own world.”

Adolescents who feel that they matter are less likely to suffer from depression, low self-esteem and suicidal thoughts. They’re less likely to lash out at their families and engage in rebellious, illegal and harmful behaviors. Once they reach college, they have better mental health.

As parents, we sometimes feel helpless because it’s impossible to solve our children’s problems. In those situations, we can still provide support by “companioning” — walking alongside them and listening. Adam told me about evidence-based programs at Arizona State University that help families cope with parental loss and divorce. These programs teach parents to create and maintain warm and strong relationships, communicate openly with children, use effective discipline, avoid depression and help their children develop coping skills and strategies. When families participate in these programs for 10 to 12 sessions, over the next six years children have fewer mental-health and substance-abuse problems, higher grades and better biological stress responses.

One afternoon, I sat down with my kids to write out “family rules” to remind us of the coping mechanisms we would need. We wrote together that it’s O.K. to be sad and to take a break from any activity to cry. It’s O.K. to be happy and laugh. It’s O.K. to be angry and jealous of friends and cousins who still have fathers. It’s O.K. to say to anyone that we do not want to talk about it now. And it’s always O.K. to ask for help. The poster we made that day — with the rules written by my kids in colored markers — still hangs in our hall so we can look at it every day. It reminds us that our feelings matter and that we are not alone.

Dave and I had a tradition at the dinner table with our kids in which each of us would share the best and worst moments of our day. Giving children undivided attention — something we all know is important but often fail to do — is another of the key steps toward building their resilience. My children and I have continued this tradition, and now we also share something that makes us feel grateful to remind ourselves that even after loss, there is still so much to appreciate in life.

For my friend’s son whose robot was destroyed, a turning point came when one of his former teachers got in touch to see how he was doing and started spending time with him every week. She encouraged him to reach out to other kids and make friends, then followed up, reinforcing each step he took. She cared. He mattered. When a new kid started at the school, the teacher encouraged them to get together, and the friendship took. “It made such a difference for a teacher to take an interest in him and a friend to bond with him,” his mom said. “It was like the sun came out in our house.”

Since my children were so young when they lost their father, I am afraid that their memories of him will fade, and this breaks my heart all over again. Adam and I also learned that talking about the past can build resilience. When children grow up with a strong understanding of their family’s history — where their grandparents grew up, what their parents’ childhoods were like — they have better coping skills and a stronger sense of mattering and belonging. Jamie Pennebaker, a psychologist at the University of Texas, has found that expressing painful memories can be uncomfortable in the moment, but improves mental and even physical health over time.

To keep Dave’s memory alive, I asked dozens of his closest family members, friends and colleagues to capture their stories about him on video. I also taped my children sharing their own memories, so that as they grow up, they will know which are truly theirs. This past Thanksgiving my daughter was distraught, and when I got her to open up, she told me, “I’m forgetting Daddy because I haven’t seen him for so long.” We watched the video of her talking about him, and it gave her some comfort.

Talking openly about memories — not just positive ones, but difficult ones, too — can help kids make sense of their past and rise to future challenges. It’s especially powerful to share stories about how the family sticks together through good times and bad, which allows kids to feel that they are connected to something larger than themselves. Studies show that giving all members of the family a chance to tell their version builds self-esteem, particularly for girls. And making sure to integrate different perspectives into a coherent story builds a sense of control, particularly for boys.

A friend of mine who lost his mother when he was young told me that over time, she no longer seemed real. People were either afraid to mention her or spoke of her in idealized terms. My hope is to hold on to Dave as he really was: loving, generous, brilliant, funny and also pretty clumsy. He would spill things constantly yet was always somehow shocked when he did.

Now, when emotions are running high in our house, but my son stays calm, I tell him, “You are just like your daddy.” When my daughter stands up for a classmate who is getting picked on, I say, “Just like your daddy.” And when either of them knocks a glass over, I say it, too.